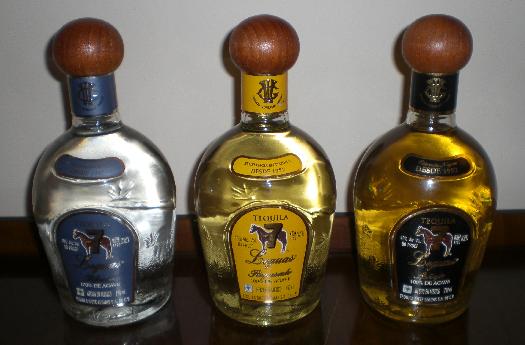 7 Leguas offers the three traditional (all 80 proof) tequila varieties (plus an extra anejo, which I didn’t try). Bottled in squat little decanters with bulbous wooden stoppers, they’re immediately eye-catching. Here’s how they taste.

Tequila 7 Leguas Blanco is an unusual silver tequila, a very herbal spin on white tequila, with notes of sweeter spices like cinnamon on the palate. It’s reasonably smooth, but the vague sense that you’re tasting apple pie along with your agave is uncanny and a little distracting. Better neat than on the rocks. B+ / $44 [BUY IT NOW FROM DRIZLY]

Tequila 7 Leguas Reposado is aged eight months in white oak. That’s on the long side compared to most modern Reposados (though one year is the “legal” maximum), but it’s still quite a pale yellow. The flavor is substantially muted from the Blanco, which knocks the sweet herbs somewhat out of the picture, but the woodiness adds an interesting complement. Not sure everything comes together quite the way it should here, ending up on the bitter side, but it’s perfectly drinkable. B / $47 [BUY IT NOW FROM DRIZLY]

Tequila 7 Leguas Anejo is a darker gold, aged two full years in oak. Here the wood takes center stage, rubbing out those herbs and leaving you with a solid agave core laced with oak. Try pouring it and waiting a few minutes before drinking it. I found the Anejo on the bitter side initially, but after it had a chance to aerate a bit, the tequila really gelled, offering a sweet caramel finish that worked very well. A- / $50 [BUY IT NOW FROM DRIZLY]