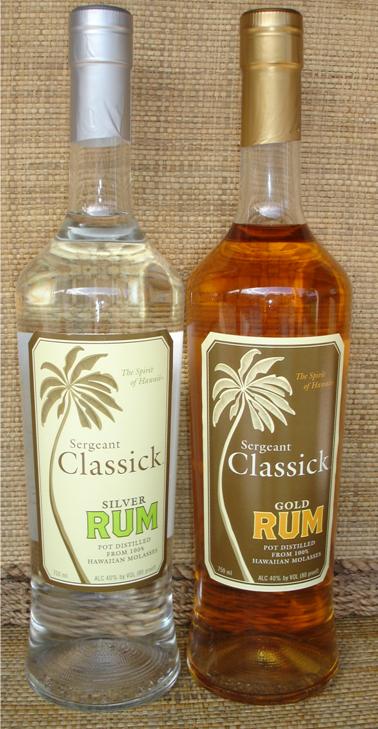 Rum is just about the only spirit I don’t regularly drink straight (some superpremium dark rums excepted), but it’s also the one that makes for some of the most delicious cocktails. Funny, eh?

Sergeant Classick is one of the only rums that claims to come from the state of Hawaii, as it’s made from molasses from the only sugar mill on the island of Kauai. (Though the sugar is Hawaiian, the spirit is actually distilled in California.) I had the good fortune to taste both the white and gold rums from the good Sergeant, which are only now coming into distribution here in the U.S.

Sergeant Classick Silver Rum is a crisp and clear rum, very traditional tasting and with considerable bite. It was too harsh on its own for me (if anyone out there drinks white rum straight, drop me a line and send a picture of your liver), but it shined in a mojito and other lighter style cocktails. Nothing at all wrong with this rum! B+

Sergeant Classick Gold Rum is where this rum really shines. Drawing additional flavor from oak chips (not barrel aging), the rum takes on a nicely golden hue and a more caramel, sugary flavor. In a Cuba Libre, the difference was night and day: The Gold offering a perfect complement for Coke that really brings out those caramel notes. In other complex cocktails it also holds its own. It’s a real treat. A [BUY IT NOW FROM CASKERS]

The retro labels are surprising conversation starters, but mention that this is Hawaii’s only rum and you’ll soon find your precious bottles of Sgt. C being drained by your guests.