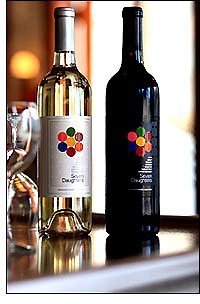 My dad once asked me what would happen if you took a bunch of different wines and mixed them together. Would they taste very good? The result would probably be something like Seven Daughters, curious and not entirely unsuccessful.

Two wines — a white and a red, both labeled nonvintage “California” wines, which means the grapes could come from any year and anywhere in the state — are available. Seven Daughters White is the greater success, comprising seven grapes (hence the name): Riesling, Symphony (had to look that one up), Chardonnay, Orange Muscat, Gewurztraminer, Sauvignon Blanc, and French Colombard. Here, the sweeter flavors of Riesling, Orange Muscat, and Gewurztraminer take center stage, and the Sauvignon Blanc is clear as well. Chardonnay adds some body and creaminess to the wine, and the Colombard (which is the most prevalent grape here by percent volume), works largely just to be a base for everything else. The result is not bad at all, very full of fruit and easy to drink, much like a budget version of Caymus Conundrum, which has a blend that’s reminiscent of this wine. B+

Seven Daughters Red is less of a hit. Comprising Syrah, Merlot, Zinfandel, Carignane, Sangiovese, Cabernet Franc, and Cabernet Sauvignon, here we get a lot of complexity that is not necessarily going to work together. Cabernet Sauvignon and Zinfandel alone make for a rather clashing pair, and some of these other matchups (Syrah and Sangiovese?) don’t really work on paper, either. Sure enough, the red is green and herbal, almost bitter, with only light fruit shining through. There’s no sense of any varietal here, unlike with the white, and it comes across more like someone was trying to find seven grapes to make a wine out of rather than a concerted effort to make the perfect blend. C