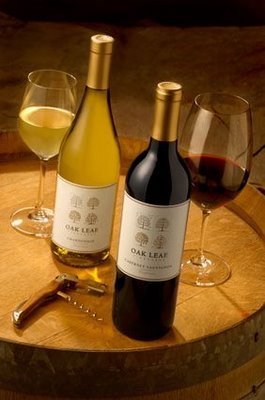 How good can something cheap really be? When last I broached this topic I found there was some correlation between wine prices and quality, but that it was fairly weak. But that analysis doesn’t really apply to the rock-bottom pricing that rules the world of jug wines, box wines, and stuff like Oak Leaf, a new label of “Extreme Value Wines” (their words), which sell in California Wal-Marts for $1.97 a bottle ($2.97 everywhere else).

By now few are surprised by $2 wine. Two-Buck Chuck (aka Charles Shaw) has been a massive seller in these parts for years. I even know people that swear by it. (I can’t stand the reds but, if forced, I can stomach the whites.) It isn’t surprising that other labels would like to grab a little of Chuck’s market share.

Oak Leaf Vineyards is the latest challenger, and the company’s selling Chardonnay, a Pinot Grigio/Chardonnay blend, Merlot, Cabernet Sauvignon, and White Zinfandel. I tried the Chardonnay and the Merlot (all the wines are non-vintage, with no year specified) just to answer the question: How good (or bad) could this stuff possibly be? (After all, the label has actually won at least four medals at various wine competitions!)

The answer: Surprising, but not in the way I expected. Though “cheap white” is usually a better bet than “cheap red,” the Oak Leaf Chardonnay was a miss, lacking much structure at all and reminding me more of the kids’ apple juice that had sat out too long and fermented than of real wine. The punch of alcohol is strong, feeling almost like a fortified wine (or at least a doctored one). I give it a C- at best.

The surprise was the Oak Leaf Merlot, which was immeasurably better than the Chard, though still nothing to write home about. An initially decent mouthful of light fruit is palatable, but it ultimately gives way to some bitterness and green, vegetal notes. Again, that punch of raw alcohol, though much slighter here than in the white. It’s passably drinkable in a way that the Chardonnay is not, but it’s hardly something to treasure and hang on to for when you’re grilling a filet mignon. Let’s call it a C+.

Would I go out of my way to pick up a bottle of Oak Leaf? No, but the sheer feat of getting wine into a bottle at retail for 197 cents is nothing short of impressive. I will add that extreme value wines like this do serve one important role in the beverage industry: They expose people who’d otherwise be drinking beer, soda, or something else to wine in a positive way, rather than the overwhelmingly negative one associated with, say, Thunderbird. Oak Leaf, I would hope, might give drinkers a taste for wine… and then encourage them to aim one shelf higher with their next purchase.