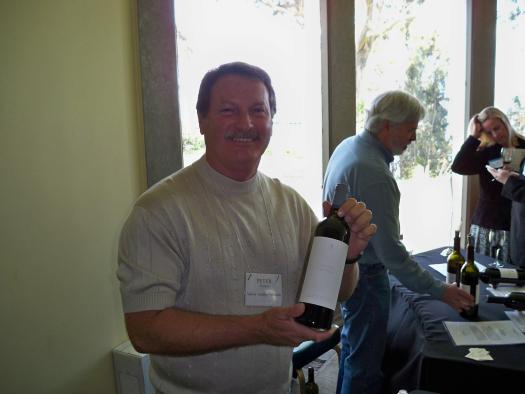 Rather than focus on a specific grape varietal, this event had the unique idea to get the word out about three small parts of Napa Valley, specifically, the mountain regions of Spring Mountain, Mount Veeder, and Diamond Mountain, which run one after another along the valley in the Mayacamas mountain range that makes up Napa’s western flank (and separating Napa from Sonoma). (A decent map can be found here.)

Tastings were broken up by region, with each AVA filling its own room in the Fort Mason Officer’s Club. Overall, the wines were extremely impressive. The focus across the board was on Cabernet, which does well in the mountains of Napa, with many single-vineyard wines being poured. And though these regions are only miles apart (and Diamond and Spring are virtually on top of each other), the differences among the wines were striking, with obvious character showing through for each region. Before I get to the highlights, one thing was clear: 2005 is shaping up as considerably better than 2004 for all of these regions. While good, even great, wines can be had from ’04, it’s the ’05s that consistently knocked my socks off.

Spring Mountain – The largest number of wines could be had from Spring Mountain, and it’s obvious why this room was picked to house the snack table. Spring Mountain cabs are so thick and tannic that you can’t drink much without needing a slice of ham or something to cut through the tannin. If you’re looking for a “textbook” Cabernet, Spring Mountain is where it’s at. Highlights include Fantesca’s Chardonnay, the best white (of only few poured) I had at the event, full of grapefruit and perfume and only lightly oaked. Best of the reds go to Frias’ “Red Wine,” a $30 blend of Cab, Merlot, Cabernet Franc, and Syrah, an easy drinking wine overflowing with fruit that’s also a huge bargain. Another standout: Anything from Guillams (pronounced “gwilliams”) and Sherwin’s 2005 Cab (a $90 powerhouse full of blackberry flavor).

Mt. Veeder – These wines were much more earthy, more characteristic of Old World Burgundy at best, a little barnyardy at worst. Some standouts: Brandlin’s $80 2004 Cab, its first Cabernet bottling ever. Robert Craig’s 2005 Cab, which won’t be released until the fall, was also outstanding, a “big” wine that still managed to pack in a ton of fruit.

Diamond Mountain – I unwittingly saved the best for last: Diamond Mountain has historically been known for producing wines with a dark chocolate character, and nowhere was that more apparent than in Andrew Geoffrey’s 2004 Cabernet (pictured), a nutty, chocolatey, and rich wine that was probably my favorite wine of the event. Lots of other good, cocoa-toned wines, but nothing quite lived up to Geoffrey’s juice.

Prices were unavailable for many of the wines so I’m not including them in the full tasting report that follows.

Tasting Report: Sonoma in the City, May 2008
Posted in Events, Reviews, Wine