How Russian is Zyr Vodka? There’s a picture of the Kremlin on the bottle, that’s how. Distilled from Russian rye and wheat (“made from the rich black soil of Russia’s heartland”) and created with water drawn from deep in Russia’s aquifers, the only way this could be more Russian is if the ghost of Lenin delivered it to my doorstep.

Intriguingly, the brand new Zyr is bottled based on recipes recorded by Dmitri Mendeleev (much like Russian Standard’s Imperia claims), creator of the Periodic Table of Elements and officially responsible for standardizing vodka production and proof levels for Mother Russia in 1893. If anyone knows chemistry, it’s gonna be Mendeleev, and his nine filtration processes and five distillations speak to some serious smarts in the booze-making department. (That said, I doubt Mendeleev had a UV filtration system in place in the late 1800s, but still, I like the idea.)

Oh, so how’s it taste. One whiff and you’ll know this is vodka, and it’s distinctly Russian in origin, too. One taste and it almost knocked me down, a bracing jolt made stronger by intense cold straight from the freezer. It mellows when it warms up a few degrees, ultimately leaving you with a lemony, peppery, and surprising buttery character to the mouthfeel, not oily like so many other vodkas. There’s quite a bite to it which makes it feel at once very traditional and still difficult to sip for more than a shot. It works well as a mixer, though at $30 a bottle you might not turn to Zyr for Long Island Iced Teas… 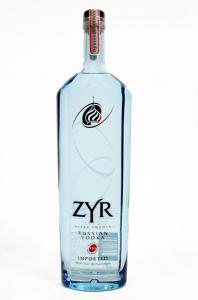