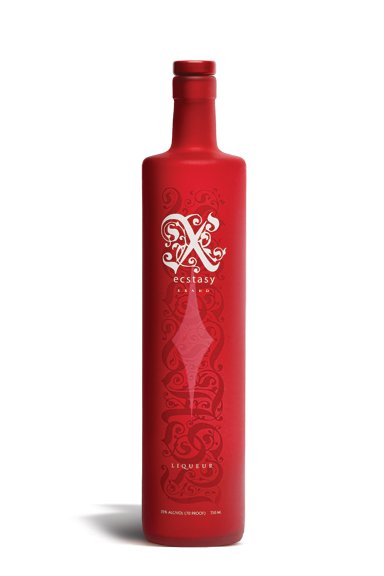 The red bottle and fancy writing make Ecstasy instantly appealing… but what is this “liqueur” that’s bottled at a whopping 70 proof and includes caffeine?

Clearly marketed at the Red Bull & Vodka crowd, Ecstasy is a spirit (basically diluted grain alcohol) for the LiLo/Paris/Britney crowd, spiked with caffeine, ginseng, taurine, and other stimulants designed to help you dance-slash-party after a long day of sleeping and shopping instead of mellowing out after a long day of work.

Ecstasy describes the spirit as having “the predominant flavors of pomegranate and citrus with notes of apple,” and by that I assume they mean “bubble gum.” Seriously, this is Bubblicious distilled into a bottle, and infused with stimulants and booze. Drinking it straight tastes a little like chewing Bubble Yum with a gushy vodka center. Again, imagine the target audience.

I tried Ecstasy straight (not great), with equal parts vodka (better), and in one of the most daring things I’ve ever consumed, mixed in equal parts with Jagermeister in a concoction Ecstasy calls the Exorcism (not as bad as you’d think; a bit like Blackjack gum). Still, no one in my generation is going to be knocking this stuff back on a nightly basis. But if the paparazzi are after you, well, by all means, get to it.