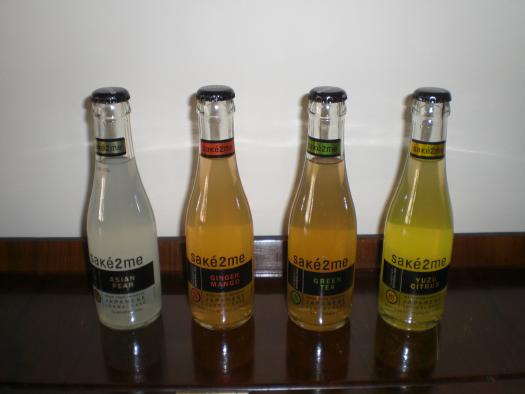 My first challenge in this review is not how to describe what saké2me tastes like. It’s how to categorize it in this blog.

saké2me is a blend of sake, natural flavors, and sparkling water. It comes in ready-to-drink bottles 187ml in size and weighs in at a beer-like 7% alcohol, comparable to malt liquor-based beverages like Smirnoff Ice. So it’s a watered-down, flavored rice wine that has about the same kick as beer. Where would you categorize it, considering we don’t have a “wine cooler” section.

That issue put aside, saké2me is an intriguing concept, if a little underwhelming in the execution. In all four flavors, the ricey, alcohol flavor of sake comes through loud and clear. The carbonation is fairly light, considerably less than Champagne or soda, and all the bottles are sugar-sweetened to make them a little easier to drink. Pour a shot of sake into a 7-Up and you’ve got the basic idea here, sans the Asian flavorings.

So, about those flavorings. Well, here’s how they went down, in order of my personal preference. But if you are crazy for sake you’ll probably love all four flavors.

saké2me Yuzu Citrus – It looks like Gatorade but it tastes very different, lemony while also being distinctly Asian, with exotic spice in the blend. The sweetest of the bunch, it was my personal favorite. B+

saké2me Ginger Mango – The mango is very apparent, though watery. The ginger is less so. Still quite pleasant. B

saké2me Green Tea – An outlier in this collection, it really does taste like tea got in the sake along with a little sugar. Also quite pleasant, not bad at all, but very, very different than the other three bottles. This isn’t one to switch to on the fly. B

saké2me Asian Pear – Quite sour, like a Japanese radish (and no pear I’ve ever had). B- 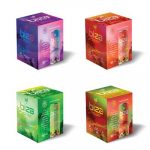