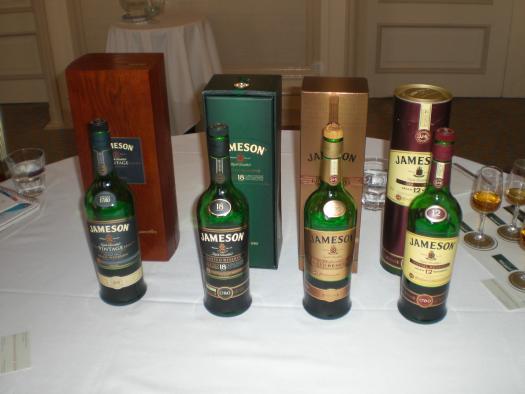 Amidst the crushing shelf space given over to Scotch and Bourbon, you (and by you, I mean myself) can be forgiven for not knowing all that much about Irish Whiskey. But did you know that Irish Whiskey was once the most-consumed whiskey in the world. Unfortunately, those days ended with Prohibition, and Irish has never regained its status since.

Jameson graciously invited me to taste four of its rare Irish bottlings today, including its newly-released Jameson Rarest Vintage Reserve (JRVR) 2007. How rare? It’s $250 a bottle, a mere 1,000 of which will be sold in the U.S. I was told I was the first person in California to ever drink it. Dang.

One of Jameson’s master distillers, Brendan Monks, took me through the offerings and some of Jameson’s history, which dates back to 1780, as well as some of the key differences between Irish and other whiskeys. Turns out there are many: Unlike Scotch, Irish dries its barley with hot air, not smoky, open fires, hence the lack of much smoky character in Irish. Irish uses some unmalted barley in its mix, too. Irish is also distilled three times (Bourbon is distilled once, Scotch twice), which removes much of the heavy, oily notes from the spirit. And finally, Irish Whiskey is matured in multiple types of wood casks instead of just one (though Bourbon barrels are the most common), which (as we’ll see in a moment) can give each whiskey a very different character.

On to the tastings:

Jameson 12 Years Old Special Reserve – The first step up from Jameson’s regular bottling is this 12-year powerhouse, aged in specially-commissioned Sherry casks from Spain for, you guessed it, 12 years. The result: a clean, honeyed, lightly floral whiskey that is immediately redolent of Sherry. I’m hardly a Sherry fan but found the 12 Year wonderfully light, crisp, and easy to drink. 80 proof. A- / $39

Jameson Gold Reserve – One whiff and you know you’re on to something different here. Aged largely in Bourbon barrels, this blended whiskey (from various casks 10 to 20 years old) gets a characteristic vanilla and wood tone from the addition of 10 percent of the whiskey aged in virgin oak casks. When blended it’s outstanding, and closer to a good Bourbon than any Irish whiskey I’ve tried. I’d happily drink this any time if I could afford it. 80 proof. A / $74 [BUY IT NOW FROM CASKERS]

Jameson 18 Years Old Limited Reserve – Definitely my least favorite bottle in the tasting, this had some of the character of the 12 Year but felt like a wine that had faded to me. Very smooth, yes, but far too understated for me. What was left had a highly medicinal tone to it. If you like the Listerine-like flavor of Laphroaig Scotch, you’ll love the 18 Year. 80 proof. B / $78 [BUY IT NOW FROM CASKERS]

Jameson Rarest Vintage Reserve 2007 – The secret sauce? Whiskeys aged 20 to 23 years are, in part, laid down in old Port casks, a deal Jameson brokered with Sandeman decades ago and is now making its first appearance on the market. It’s a heavenly concoction that makes me wonder why more whiskey makers don’t turn to Port barrels. The mix is incredible, with that raisiny, plumlike flavor in the mix, plus sugary, cinnamon, and chocolate notes. (I strained to catch the banana that Monks said was present, but it eluded me.) Even if I could find a bottle of this, I’m sure I wouldn’t be able to afford it, but fortunately Jameson sent me home with a small vial of the good stuff for later. Come St. Patrick’s Day, I know what I’ll be drinking, and it won’t be green beer. 92 proof. A+ / $250 [BUY IT NOW FROM CASKERS]