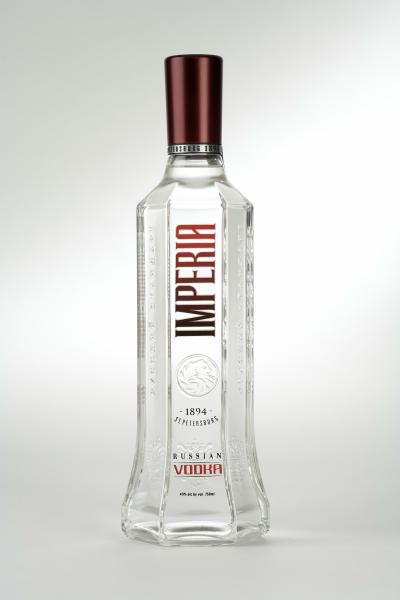 If you aren’t familiar with Russian Standard’s Imperia vodka (its highest-end of three bottlings) due to its ubiquitous print advertising, you won’t miss the angular, hexagon-bottomed bottle at the liquor store. It looks like something that ought to have been erected on the outskirts of Moscow during the Yeltsin years, a stark monument to drowned sorrows and liver damage.

Imperia ain’t Popov, though. It’s a premium vodka with a premium price (considerably more expensive than, say, Stoli), made from winter wheat and distilled a nearly-ridiculous eight times along the way. It is later filtered four times, twice through Ural Mountain Range quartz crystals. No idea how that works, but there you go: It all must be part of Dmitri Mendeleev’s original recipe, created for Czar Alexander III in 1894. Russian Standard says it uses the same recipe today.

Ah, but how does it taste? Not bad. It’s clearly a Russian, grain-based vodka, though not too strong at 80 proof. All that distilling and filtering leaves it with a very faint flavor. If you’re looking for an utterly neutral spirit to blend cocktails with, you’ve found it. Imperia is left with very little on its own, just a slight bittersweetness and a faint taste of almonds, followed by a mild rubbing alcohol finish. You could really sip this all day like water.

One caveat: At $34, it’s one of the most expensive vodkas on the market. It’s a nice spirit, but many may find it tough to shell out the asking price when others are about as good at half the price. Your call.