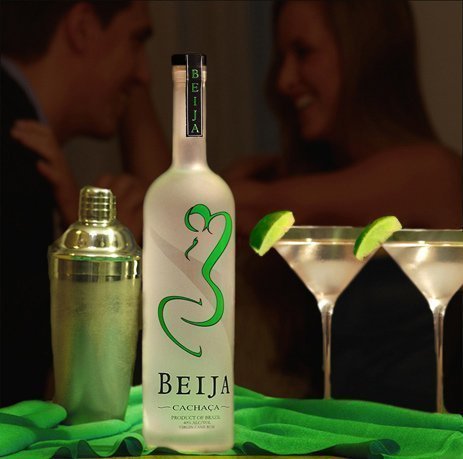 Eric Felten wrote recently that cachaça is taking the world by storm, like it or not. The unofficial national spirit of Brazil, cachaça is used to make Brazil’s official national cocktail, the Caipirinha. Brazil produces over a billion liters of the stuff each year, and only 1% of it ever leaves the country. Brazilians, they love their cachaça.

Cachaça (roughly pronounced ka-SHAH-zuh) is essentially fermented sugar cane juice. It’s similar to rum, except rum is aged in oak and can be made from molasses. But cachaça has a significantly different flavor, a stronger, sharper tone that many compare unfavorably to gasoline. I’m hard-pressed to argue with that. Drinking cachaça straight, no matter who makes it, is nearly impossible.

Better to give the Caipirinha a spin instead. The Caipirinha (roughly pronounced kai-pah-REEN-yah) is just cachaça muddled with lime and sugar, topped up with ice. It’s a stout drink, but the lime and sugar complement the cachaça well. (Lesser drinkers may try the Sparkling Caipirinha instead, recipe here, which many like even better.)

All of which brings us to Beija’s cachaça, a new entry into the cachaça market and, so they claim, the “world’s first virgin cane rum.” (Virgin means it is distilled from the first pressing of sugar cane only, much like virgin olive oil.)

Few spirits have been consumed as rapidly at Drinkhacker HQ as Beija (pronounced BAY-zha) has. I think Beija is pretty good, too: It has little of the firewater tone of most cachaças, and in cocktails it is sweet and smooth, with a lightly floral note instead of a lighter fluid one. It’s distinctive without being overpowering. Tastes a little like candy. (I compared it side by side with Leblon cachaça and there was no comparison that Beija was far superior.)

Would I rather drink a premium rum than cachaça? Probably, but if you’re looking for something off the beaten path, Beija is as good as it gets. Watch for it on store shelves in the near future.