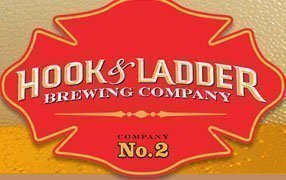 Across the northeastern U.S. you’ll find bars serving Hook & Ladder beer, products brewed by a company with roots in the firefighting biz: The founders are two brothers, one of whom is a volunteer fireman. The beers aren’t widely distributed west of Virginia, but if you should find one, you’re in for a treat. I got my hands on all three of H&L’s brews (including its newest one, Lighter). Some thoughts below.

Hook & Ladder Golden Ale – This is H&L’s signature brew, a classic American ale that is nicely polished, rich with flavor but not too bitter. It’s a beer that fills your mouth and comes across as almost heavy, but it goes down so smoothly that it ultimately reveals itself as a real thirst-quencher that will leave you wanting another one immediately. 5.5% abv. A

Hook & Ladder Backdraft Brown – A lot like the Golden Ale, but (obviously) brown in color and more bitter, more full of hops. It’s a deep brown ale, but not nearly as bitter as the color would indicate. The roots are clearly in the Golden Ale with this one, but if you want something a little meatier it’s a good choice. I prefer the Golden, but this one works just fine. I’d take it over Newcastle any day. 4.5% abv. A-

Hook & Ladder Lighter – H&L’s entry into the light beer business won’t send the Silver Bullet marketing team into a panic. At 94 calories, it’s as watery and tasteless as any light beer I’ve tried. I couldn’t tell the difference between this and Miller Lite if you put a gun to my head. (Please don’t. I’ll drink the beer if it comes to that.) 3.2% abv. D+