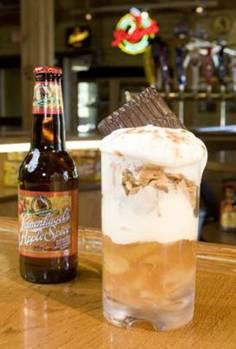 Apple and spice in the beer? You bet. Leinenkugel’s Apple Spice seasonal brew is loaded with apple and cinnamon to the point where it tastes more like a cider than a beer. I found it incredibly sweet and difficult to drink much more than half a bottle, but the ladies seem to be bigger fans than I. If you’re a cider fan, you’ll definitely want to give this beer a try (if you can find it in your neck of the woods); it really is something different.

Leinenkugel’s suggests the beer be served either cold or, get this, hot, like a hot, mulled cider. I didn’t go that far, nor did I experiment with the delicious-looking dessert that Lienie’s created (that’s it in the picture, next to the beer), involving apple pie filling, vanilla ice cream, graham crackers, and half a bottle of Apple Spice beer whipped into a meringue. I’d be happy to try it, though…