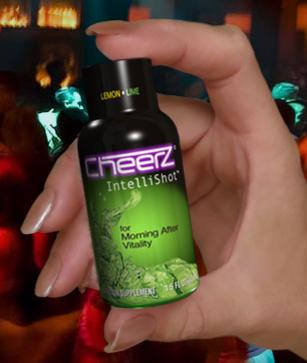 Hangovers. I don’t like ’em. You don’t like ’em. Hangover remedies are legion, of course, but those with the most promise are the ones that promise you never get the hangover to begin with.

Enter Cheerz,  a little shot-sized vial of green liquid that, when consumed while you drink alcohol, promises to eliminate hangovers and provide “morning after vitality.”

You are supposed to drink a vial with every three to four “standard adult beverages,” so after three glasses of wine last night I sucked one down. First try was unrefrigerated, a mistake. Cheerz is difficult on the palate, to say the least: It’s sickly sweet like lemon-lime syrup at first, then you realize that’s to mask a severe bitterness underneath. The aftertaste is harsh, and drinking this in one big gulp (difficult due to the tiny mouth of the bottle) is the only way to do it, and the colder the better. (You can also use it as a mixer in cocktails; I didn’t try this, but it may work better than the one-slug method.)

Immediately after finishing the dose I felt nauseous. I had to lie down, in fact. The feeling passed after 15 minutes, but it was disconcerting… especially with that aftertaste lingering the whole time.

Come morning, I felt no better or worse than I normally do, but certainly not hungover in the slightest, though to be honest I didn’t drink enough for a real hangover (and rarely do). I can report that while I had trouble sleeping in general thanks to a nagging cough, I’ve been remarkably productive all day today. So maybe there’s something to this after all. Still, the taste and initial nausea might make it tough for me to take again.
What’s in Cheerz that makes it work? Succinic acid, glucose, L-glutamine, malic acid, N-acetyl L-cysteine, L-alanine, and milk thistle seed extract. I don’t know what any of that stuff means, really, but there you have it. You can read all about it on the Cheerz website (see below). Cheerz is also available in pill form.

If anyone else out there tries the stuff (especially after a heavier night of drinking), please let me know or post a comment below! I expect individual mileage may vary pretty wildly.