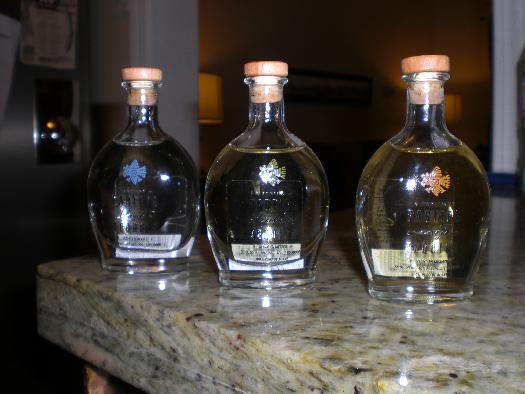 Finally got to sample Partida’s new, full line of tequilas today. Color me impressed. No, seriously. Here’s how they shake out.

Tequila Partida Blanco (2007) – This is a peppery but very clean silver tequila, perfect for mixing and even for sipping straight in a pinch. Among the best tequilas I’ve tried. A- / $40  [BUY IT NOW FROM CASKERS]

Tequila Partida Reposado (2007) – Very similar to the blanco in many ways. A pale yellow, lighter than most reposados. It has a bit more bite than the blanco and a light woodiness reflecting its cask aging. I like it almost as much as the blanco, but not quite. A- / $50 [BUY IT NOW FROM CASKERS]

Tequila Partida Añejo (2007) – One of the Cadillacs of añejo tequilas, and my new favorite “sipping” tequila. This is an incredibly svelte añejo, oaky and aged in Jack Daniels barrels, giving it a complexity and lushness that you don’t get in most tequilas of any age. A strong sweetness on the finish gives it a fruitiness that’s, again, uncommon in this liquor. Tequila fans will need to put this on a must-try list, immediately. A / $62 [BUY IT NOW FROM CASKERS]

Now for the bad news: None of these are what I’d describe as cheap. You pay for quality, especially in the tequila world, it seems. (Feeling rich? There’s a $330 bottle called Elegante Extra Añejo that even I haven’t gotten to try…)