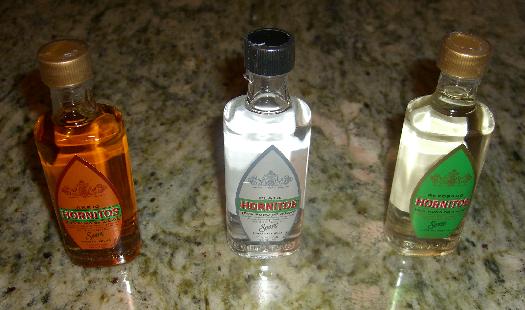 Hornitos is known for its trademark Reposado tequila with the bright green label. But now Hornitos expands in a natural direction: With both a Plata (aka Blanco or silver) tequila and an aged Anejo, to round out the line with one of each of the three traditional tequila varieties. I tried them all side by side and against some competition, too, to see how well the expansion went. All are 80 proof.

Hornitos Plata Tequila (2007) is a straightforward, unaged tequila, very crisp and having that trademark tequila “kick,” an almost medicinal note that makes it bad for sipping straight but good for mixing. Hornitos’ Plata is as good as any silver I’ve tried. It would be fine in a Mexican Martini or a Frozen Margarita. B+ / $25 [BUY IT NOW FROM DRIZLY]

Hornitos Reposado Tequila, the old guard, is aged in oak for two months, giving it a pale yellow tone and smoothing out the tequila. It’s a very creamy tequila, but oddly was my least favorite of the three. Sure, it’s a far better choice for sipping straight than the Plata, but its undertones of vanilla and oak are too nuanced to make it all that interesting in the long run. As a Margarita ingredient, it would be fine, though. B / $26 [BUY IT NOW FROM DRIZLY]

My favorite was the Hornitos Anejo Tequila, though I’m always a fan of Anejos over unaged and reposado tequilas. I put this one up against my standby, Don Julio, and found them similar in overall tone but markedly different in a few key ways. While the Don Julio was oaky and smoky, the Hornitos was peppery and creamy (much like the Reposado), but with those vanilla notes far more pronounced. This is a great straight choice with spicy, saucy food. I might actually prefer it on the rocks to neat. A- / $30 [BUY IT NOW FROM DRIZLY]

The prices aren’t bad on all of these; I’d highly recommend tequila fans pick up a bottle of the Anejo, which is priced to move.

Review: Olmeca Altos Plata (2012) and Reposado Tequila
Posted in Buy It Now, Rated A-, Rated B, Rated B+, Reviews, Tequila