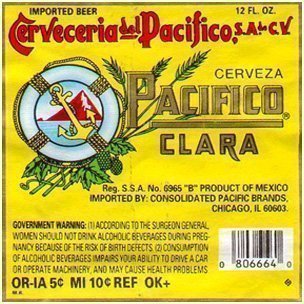 Now I’m not a beer snob. I generally prefer Japanese and Mexican lagers, pale ales and IPAs, and the occasional bock. But if given my choice of beers to drink alone, it will be Pacifico half the time. Tonight I made chicken tacos. Pacifico goes with them perfectly.

The thing that sets Pacifico apart, really, is the gentle body. The crisp, pale lager reveals a surprising sweetness when you take the first sip. Cut it with a squeeze of lime and you have the perfect blend of sweet and sour, but in a drink that you can get for about a buck a bottle when you buy by the case.

Hey, I call ’em like I see ’em. Pacifico isn’t fancy or complicated, but for the millions of people out there who suck down Coronas by the six-pack every weekend, it’s an infinitely better upgrade at exactly the same price.

The final joke’s on me, I guess: Pacifico is owned and bottled… by Corona. Sigh.